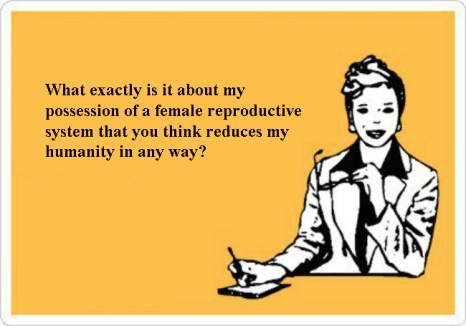 A woman is an adult human female. Here is what we know about any given woman:

Over the past couple of years, I have been flabbergasted by the female-shaming of Leftists. Over and over I am told that defining a woman as an adult female human somehow reduces us to our female reproductive organs.

Of course, men who claim the label “male” are not reduced to penises & testicles, because no one is reduced by the possession of organs that are deemed positive and powerful, not to mention the (supposedly) default human equipment.

Many feminists fight back against this female-shaming with female pride. Female human beings are, after all, the only ones who can incubate new life. We can make movie after movie featuring male humans who save the human race from extinction, whether battling aliens or zombies or asteroids, but it doesn’t seem we can show any basic appreciation for the dangerous and draining labor of pregnancy and childbirth taken on by billions of real-life women throughout human history – labor to which every human being on Earth owes their very existence. I personally don’t feel any goddess type pride in simply possessing a female reproductive system, and often feel frustration about it (mostly due to the breathtakingly misogynist nature of modern medicine) but I refuse to feel shame about it. I refuse to feel it limits my humanity in any way.

Which brings us to the experience of sexism. Many feminists whom I love and respect reject any pride in or possessiveness about the category “woman” because it is a category that has historically been defined by men as not only Other but Less Than. From birth our female bodies mark us as the sex class that is expected and demanded to define ourselves by our use value to males. Feminine socialization is a lifelong exercise in breaking our will to self-define.

There is shame to be had there – but as with any perpretration of abuse, it is on those who benefit from the abuse, not on those who experience it.

I refuse to be defined by what has been done to me. I define myself by (among other things) my capacity to resist.

Human females are different from the females of other mammalian species – we have not only endured sexism, we have fought against it.

We are the daughters of resistance. Not just the Mary Wollstonecrafts and Sojourner Truths and Mother Joneses and Sylvia Pankhursts and Simone de Beauvoirs and Pauli Murrays and Adrienne Riches and Nawal El Saadawis and Andrea Dworkins and bell hookses and Gail Dineses and Soraya Chemalys and Sarah Slamens and Nimko Alis.

Not just the women who blazed (or are currently blazing) trails, but all those who have endured (and continue to endure) lives of quiet struggle, who did and do their best to love themselves and other women in a world that wants us to be nothing but vessels for the service of men.

My mother’s name will not be marked down in even the most specialized of history books, but she fought back against a lifetime of hardships and resentment to find her own place in the struggle for shared humanity, helping me out of a bad marriage before joining with other women in her rural Southern U.S. county to defend black voters from intimidation at the polls.

Neither will the name of my homestay mom in Nairobi be marked down in even the most specialized of history books – though she took in one cousin disowned for becoming pregnant out of wedlock, and another cousin disowned for being gay; though she worked two menial full-time jobs to put her daughters through school; though she joined with other women in her church to raise funds (seemingly out of thin air, through sheer force of will) to make possible the travel and entrepenurial outreach of other young women.

Women are all of us more than men would imagine. We fight back, against the shame laid on our femaleness and our feminine socialization. “Woman” is our word and I am proud of it. I am proud of us.