I have written a very detailed blog about transgender identity politics, which is meant to be read from page 1 through page 16, located here: thenewbacklash.blogspot.com. Blog stats tell me not many people get to the end, so I am taking the liberty of posting page 15, which is about the male supremacy of the Left, here:

For AFTAs, the benefit of transgender identity politics is the ability to perform their fetish for women’s subjugation in public, while still exercising their male privilege by forcing women to comply. They use the category “woman” as a kind of S&M Barbie vacation.

However, AFTAs are a very small group of people. We’re much better served by looking at the benefits of transgender identity politics for the much larger group of people who, you know, run the Left: men.

Transgender identity politics A) work to make male privilege unnameable, while simultaneously B) framing the male violence that props up male supremacy as inevitable, which C) allows the men of the Left to get their blatant sexism on, all in the name of “trans inclusion” (which really just means the inclusion and prioritization of be-penised people in all female spaces!)

The necessary flipside of making femaleness and female oppression unspeakable is the inability to name male people, and talk about male-specific privilege.

Misogynists on the Left use transwomen as human shields against feminists who insist sex-based socialization matters – and when that doesn’t work, they also like to point at the men of the conservative Right, as if that is women’s only other option – suck all the Left Wing cock or get back in the Right Wing kitchen.

Misogynists on the Left spend all this time pointing their fingers at other people, be they human shields or bogeymen, because they’re desperate to take any critical focus off men.

Screw that. We’re gonna talk about the social category “man.”

AFTAs and their allies love to accuse feminists of being “obsessed with genitals,” because we point out that people born with penises are male and male people have male privilege:

This is as ridiculous as accusing anti-racism activists of being obsessed with skin color.

Just where exactly do they think male privilege attaches? 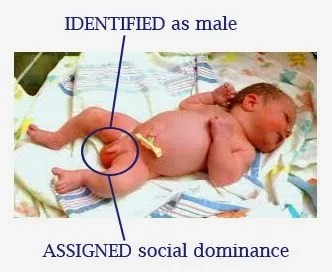 Let’s conduct a brief thought exercise. We’ll use SPH and OPH (sperm-producing humans and ova-producing humans) instead of the now-objectionable terms “men” and “women”. You can attempt to derail via the tiny percentage of people born intersex, or with cries of sensitivity for the infertile—it does not matter, because this statement still stands:

SPH control the world. Not just the “global south.” Everywhere. 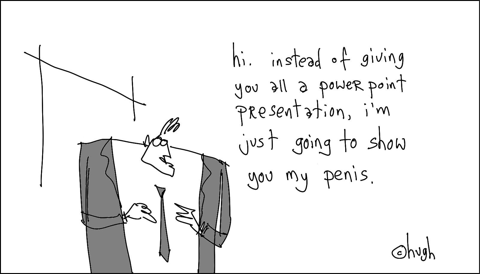 No? Yet all these fields are dominated by people-with-penises. I see three possible explanations:

1) The vast majority of people who identify themselves and are identified by others as talented in these fields just *happened* to be born with penises. This is all just a big, centuries-long coinkydink.

2) SPH are naturally superior to OPH in all these fields. (If this is your opinion, kindly fuck off out of feminism.)

3) SPH have been unfairly privileged and OPH have been oppressed (sane people call this sexism,) in which case we can all stop pretending genitalia doesn’t matter.

People born with penises are raised by their families and encouraged via media, merchandisers, schools, workplaces, governments and the general public to think of themselves as both [superior to] and [entitled to the servitude of] people born without penises (which is to say, with ovaries+uteruses+vaginas+clitorises, as there’s not actually an endless sucking void betwixt our legs.)

We’re disallowed from discussing this fact so nakedly because naked male genitalia is… hilariously stupid, as far as a symbol of superiority goes: 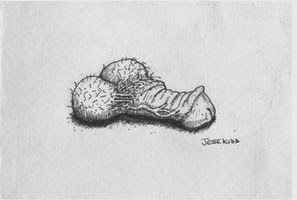 Yes, through millennia of rape men have made the phallus a symbol of sexual violence – but it is only via men’s lifetimes of sex-based social entitlement and women’s lifetimes of sex-based social subjugation that rape can stand as a (for all intents and purposes, accepted) cultural practice. The absurd banality that “penises don’t rape people” is meaningless precisely because people born with penises are for that reason alone raised to consider themselves entitled to female bodies. It is therefore no wonder they so often use those penises as weapons against those female bodies. And it is therefore unthinkable that women should ever act like the possession of a penis doesn’t really matter.

My favorite male-genitalia-related story: I was dating a fella, and when we would rassle, he would say “Darling, do you really think you could stop me?” The first time he said this, my blood ran cold. I warned him, “Don’t ever say that to me again.” The second time he said it, I responded, “Fair warning: you may have superior upper body strength, but your genitals are on the outside. Don’t make me prove I can stop you.” The third time he uttered that vile, threatening phrase, I brought my knee up and lightly tapped his balls. He fell to the ground and rolled around in pain. It was the most pleasure his crotch ever gave me.

I do NOT tell this story to shame any woman who was not able to utilize this technique to escape sexual assault, though some opportunistic victim-blamers may take it that way. I tell this story because it is important to note that this man, a self-identified Leftist who supposedly cared about me, felt such impunity in “playfully” threatening me, even after repeated warnings. It *never* occurred to him that I would *ever* harm his magical, sacred male parts.

Just as male supremacists, ever experts at reversals, would have us associate shame and weakness with the female organs that CREATE HUMAN LIFE, they would also have us associate male organs, frightfully vulnerable as they are, with unassailable power. And apparently these days, unnameable power. Do not say p—s. P—s is whatever p—s says. Do not look behind the curtain/zipper. DO NOT SAY VOLDEMORT’S NAME. 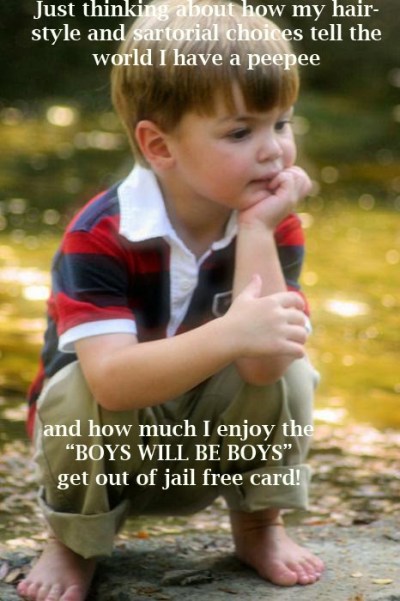 I will bet you one million dollars these people have penises: 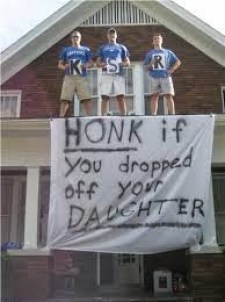 It should not be a shock that we end up here: 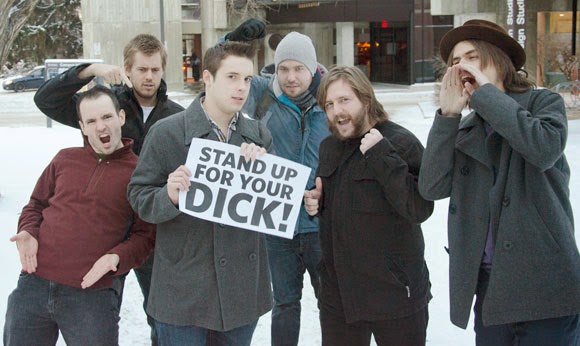 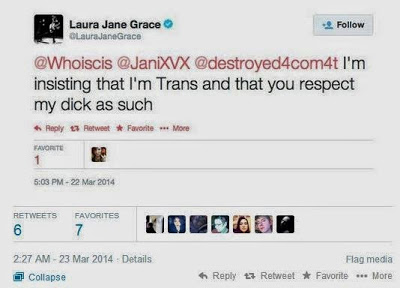 The human penis is:

1) The MALE organ of sex and peeing.

2) Out of context, rather unimpressive (sorry not sorry).

The good news, women, is that every time you stubbornly insist on seeing, naming and analyzing male privilege, you are metaphorically punching patriarchy right in the dick.

B. Framing male violence as inevitable

If gender is just “how you feel inside,” and if that feeling is totally self-defined and above critique, then what can we do about men who “feel” entitled to maintain dominance through violence? After all, if gender identity is innate, so is masculinity– which is simply the “gender identity” ascribed to “cis” men. And when masculinity is viewed as innate rather than socially constructed and validated, male violence is viewed as inevitable and is therefore always-already excused. And if male violence is always-already excused, we will never dismantle male supremacy.

We expect gender-conforming males to attack gender-non-conforming males because we all know how much men hate and fear the idea that the human qualities/tendencies we label “feminine” – whether gentleness or self-objectification or what have you – do actually exist/occur in male bodies. So transwomen say, “But we’re not men. We’re just women trapped in men’s bodies,” and everyone goes along with it. Femininity = not a man. Woman = garbage box for not-men. As long as “real” men’s superior position in the patriarchy remains their biological right as “real” men, nobody has to die.

Let’s take the question of shelters. “Transwomen need access to rape resources” cries one “activist,” hell bent on shutting down a female-only shelter. What goes unsaid in that statement is that 1) transwomen are male victims of male violence; 2) the resource in question was built and is sustained by female people; and 3) the female victims in that shelter matter, and have the right to female-only space. The sentiment can be restated more accurately and honestly as “female people must put male victims of male violence first.” Refusing to name male violence and assuming female care-taking and self-subordination is not “transing” gender roles – it’s enforcing them. Why can’t Leftist MEN take on the problem of male-on-male violence?

Another common battle cry is that transwomen must be allowed to use women’s bathrooms and changing rooms because they face violence in male spaces. Again, we must never name the basic problem there — that men may behave violently when faced with another male who defies gender norms. We simply assume that women will be the ones to solve the problem, by giving up our boundaries. There’s an obvious flaw in this logic, of course: what are transwomen afraid of in the men’s room? Violent males. Hmm.

In the above picture, a woman and her transwoman friend are headed to the ladies room. An unknown male (the red figure) looms. What is to stop that male from entering the ladies room? According to transgender identity politickers (and their bathroom bills) all he has to do is say he “feels like a woman” – if asked – though asking itself is verboten: 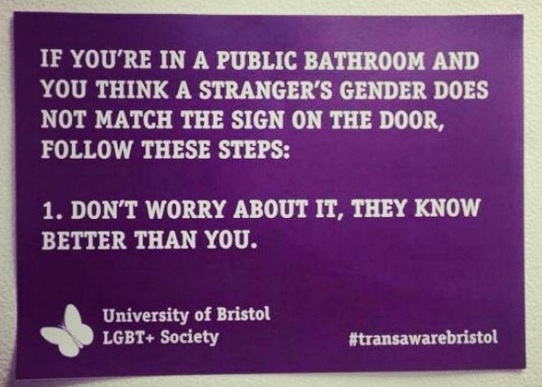 As long as any male person can legally access female spaces based solely on his say-so, neither women nor (actual) transwomen are safe in those spaces. Yet the entirely reasonable compromise of allowing access with documentation of medical treatment for transsexuality is rejected as transphobic [see page 4 for links]. This is very obviously not about safety, for women or transwomen – this is about appeasing men, both those men who get a kick out of exposing their genitalia to women and girls [see page 10 for links] AND those men who refuse to grow up enough to accept the presence of a “feminine” male person in their spaces. Any true “gender outlaw” would be aiming their pistols at those men, rather thandemanding women ignore the gift of fear that comes from our lifetimes of experience with male predation.

Just as no man must enact male violence against women on an individual level in order to benefit from the male privilege that such violence enforces for men as a class, individual men on the Left do not have to engage transgender identity politics in any meaningful way in order to reap the benefits provided by widespread social acceptance of those politics, which enable Leftist men to:

*Excuse themselves from feeling any guilt about their male privilege. After all, as long as they don’t want to call themselves women, they were simply born with manbrains and thus destined to be the Manly Men in Charge!

*Enjoy watching women being forced to confess to “cis privilege” – one can only assume this is because they agree with MRAs that we have it easy, that we are spoiled princesses with no real complaints.

*Reap the rewards of transwomen insinuating themselves in women’s spaces to make sure male feelings and orgasms are centered within feminism. And when they support AFTA efforts to fully colonize feminism, they get to feel right-on!

*Use [the violence inflicted by homophobic males on gender non-conforming males] to shame women for not being “empathetic” enough. Blaming women for male-on-male violence means they get to 1) put us back in our place of mandatory care-taking and self-abnegation and 2) excuse themselves from confronting that violence, even though they are members of the class that both inflicts and experiences it.

*Perhaps most importantly, sit back and let the Paris “I would rather have a ‘sticky fuck’ than analyze oppression” Lees of the world show women how “woman” should be done – See woman number four, below. *And finally, transgender identity politics enable Leftist men to casually dismiss as “TERFs” any feminists who might make them question any of the above.